I have been recently following Craftivist Collective http://craftivist-collective.com/ who state a spoonful of craft helps the activism go down. Well anyone who loves Mary Poppins and crafts as much as I do will have a friendship made in heaven!

There is a serious side, using craft to put across messages about human rights, environmental issues the list gos on as do the worlds in equalities. By highlighting issues hopefully we make the world think and act.

So my first attempt at craftism has take some time, I struggled with my message, I wanted it to come from the heart and also know enough about my comment that if I was challenged I wouldn't wilt away.
I though inspiration messages or quotes, then I thought something simple goes a long way. BE KIND, as simple as that. Then ofcourse the time spent sewing of which I chose to hand sew, I also spent time pondering the message for myself and how I hope it will inspire others. 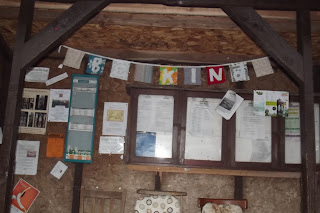 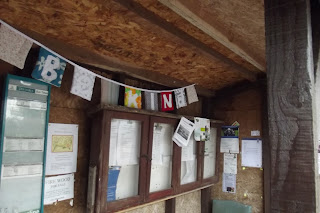 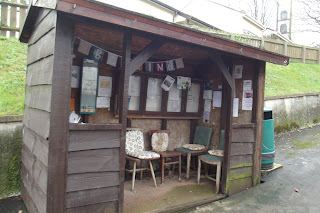 So my inspiration bunting as the collective call it is placed in my village bus stop. Yes it's a little dark and dingy but the local notice board is housed here too so most of the village should get a peek and hopefully take some note.
As I was putting up my bunting an older lady asked what I was doing and said what a wonderful idea and not enough of us where very kind these days and could I make a be happy one too!
If the idea of prompting goodness has sparked an interest have a look at the website with a valentines project coming up http://craftivist-collective.com/  . There is also book for avid knitter called knitting for good by Betsy Greer.
Give it ago it's surprising how liberated you feel !
Posted by charlotte at 01:46

charlotte
Devon, United Kingdom
I have come to realize that I love life, and here is a soundboard of my thoughts, wishes, dreams and a journal of the achieved.